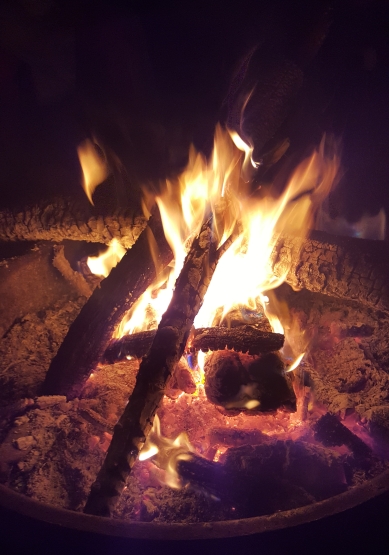 Immolation: comes from the Latin word immolat-, meaning “sprinkled with sacrificial meal.” Immolation always involves a sacrifice or offering of some sort. The word often invokes burning, a common method of sacrifice.*
Self-immolation: the act of killing oneself for political or religious reasons, particularly by burning. It is often used as an extreme form of protest or in acts of martyrdom. It has a centuries-long recognition as the most extreme form of protest achieved by mankind.**

I’ve been thinking of this idea of immolation/self-immolation for a week and thought I knew the path this story would take.

Until Sunday when I woke in a sweat of memory and despair,
which I had no choice but to let burn through me.

I could not fight the feelings and fear nor succumb to them. In a bit in the “freeze mode” of fight/flight/freeze, I could only remind myself of what I am learning about hope, home, life and me.

The freeze lifted after what seemed hours, but was likely only minutes. My soul felt scoured – in a good way. It was like having had the first layer of crackly lead paint stripped off a neglected house that was finally undergoing a loving restoration. After years of learning, plans, false starts and lost resources, the final phase of work begins.

That morning. It wasn’t pretty, but it was transformative.
And it has transformed this story.

Originally, I envisioned this blog as lies I’d believed being set aflame in a bowl. Outdated stories and explanations torched. Excuses excised and “poof” – all smoke and ash. (This next one changed me ->) Armor that had corroded itself into my skin peeled — painfully and purposefully — away.

This was not the triumphant story I had originally thought to offer. In the words of Will Smith’s Hitch, “I saw that going differently in my mind.”

But last night as I mistook the first signs of a cold for being overdressed in the murky soup, I saw what this blog could be.

I saw so many of us setting ourselves aflame so that another could stay warm.

In this flash of awareness, I saw the others who casually warmed themselves on our flame were most often sitting on a wealth of sticks, logs, coal, petrol and more. They had the resources, but not the will to contribute to the heat. It was easier to watch us … me burn.

And it is embarrassing at first and then perhaps points to a pathway of peace to realize that this is a clear picture of codependency. Not as in pop culture “joined-at-the-hip” or “Crazy Heart,” but as in clinical DSM-VI version.

I’m sure my peeps and kids might wonder what took me so long? All I can say is that I’ve hacked at all of the branches and blooms of such a soul-sucking approach to life and now I am ready to tackle the root. To set that willingness to view myself as not-enough-so-I-must-do-so-much-more-and-ask-for-so-much-less to flame and accept/embrace who and where I am: Quirky. Sunny. Get outside and play. Peeps. Community. Read. Reeses.

Not worrying about who I could or should or would be, but who I am now. Today. Feeling. Being. Bundled up with a cold of unfortunate timing.

Have you ever felt like you were burning yourself up for another who only saw you as a resource … kindling? Whether a parent, sibling, boss, friend, child or neighbor? Are you the one keeping warm on someone else’s flame? Wonder why? Like me, you might know and think in knowing, you have solved the problem.

Nope. Your knowing is great – good job. Now the real work begins and with that comes transformation. You move from neglected lean to on the harsh prairie, to home. Safe. Welcoming. Cozy. Alive again.

You are invited to join me in this uncomplicating adventure of Being Enough.
Being okay with being both masterpiece and work-in-progress.
Being loved and valued not for what we bring to the table, but because of who we are whether or not we come to the table, build a bigger table, break the stone table or sit in the living room by ourselves with a TV tray, pot pie and the TV Guide.

No wishful thinking.
No shortcuts.
No woo woo.

Just the next step toward a good and imperfect life. One where I gather wood to warm myself by the fire and invite who I choose to share the warmth.***

*https://www.vocabulary.com/dictionary/immolation
**https://en.wikipedia.org/wiki/Self-immolation
***I owe so much to someone who did not want to warm himself by my flame, but a shared warmth.

One thought on “Self-immolation”