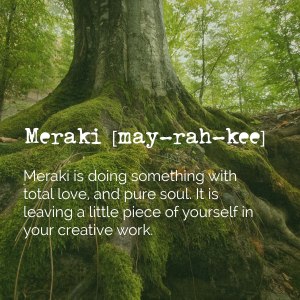 Words. I love their subtlety and shades. Great power rests in each word to build and destroy; beseech and release; and heal the broken-hearted…set captives free.

This morning while cleaning out a desk to return to a friend, I found a business-sized card with the Greek word, “meraki,” and its definition printed on front. “Meraki: (n.) the soul, creativity, or Love put into something; the essence of yourself that is put into your work.” Magic.

A few years ago, I created business cards with curated quotes, lesser known maxims (“We’re all in this together”), and goofiness to post on my desk; a silent encouragement to the folks who drifted by. At one point – I think for Valentine’s Day or the first day of Summer – I wrote several of these hopeful bits onto origami squares which people were invited to take. They did. Big burly guys and people with whom I’d had few words, pocketed the folded notes and read them at my desk or waited until later.

It was likely my best contribution in that uncertain environment.

That season was a hard one: a returning to Kansas and dragging a stupefying encounter with the worst of humanity behind me until it finally died and was laid to rest in a heap of hard work and vulnerability. Words…speaking to people was hard.

Despite years of extroverting and marketing/development, the season of returning to Kansas stole my words and demanded quiet. Any time I spoke, I felt the rush of the loss fly past my guard and out into the world. Quiet was better.

But folks were clearly needing encouragement in that pressured place – a building up. Who was I to offer life when my bloody wound oozed? The cards were the key. The cards and bowls of kumquats and clementines…bubbles and goofy bits were all I had to offer a hard-pressed team.

Meraki. I was able to pour love and hardy bits of laughing life into those cards when I had no words to speak.

And this morning as I pulled three rubber-banded stacks from their tucked-in place, I had a wealth of remembering. Good things. Not world-changing, money-making, entrepreneurial gold, but minor moments – offerings – of a sincere love for folks. A desire to serve and bring life when I was not able to bring my whiz-bang marketing to that busy front desk.

Originally, I learned “kairos” meant “the fullness of time.” I had been listening to a long-ago pastor talk about the cultural hurt of the Hebrew nation under the Egyptians and forward. He said these folks prayed, fouled up, continued making bricks, and kept praying and living and dying until one day – Kairos. In the fullness of time, a poor brown kid was born under dubious circumstances to a carpenter and his young wife.

He was the answer to all of that praying while making bricks and living and dying. He came and did his thing. He told his friends about heaven and living on earth. He said loving is hard, forgiving is a key, and folks would know they were his friends by the love they lived out in all they did…meraki. Yeah. That poor brown kid.

Today, it’s the fullness of time to let go of what I can and continue to heal from heart-stopping disappointment. Healing comes in installments and not waves; mist and sprinkles – not a flood.

It is time to live meraki; whole-heartedly, unashamedly, and in the quirks I’ve  been given. It is kairos for meraki in both the shadows and shades of brilliant life.

Derring do as the darkness gives way to dawn.

Derring do and words making magic in my soul.

One thought on “Meraki & Kairos”